This week is a little different as instead of celebrating an amazing woman I’ll be having a pop at a contemptible one. The dubious honour of being my first anti woman of the week goes to Theresa May.

As a participating member & now leader of a Conservative government who have consistently gone after the most defenceless members of our society, she has earned our scorn. May has been complicit in cuts that have resulted in the deaths of sick & disabled people. Some due to the overwhelming stress of the fitness to work assessments have exacerbated their conditions, some through being forced to undertake work they are not physically capable of sustaining & others who have taken their lives because their disability benefits have been withdrawn. Thousands of disabled have found themselves facing homelessness & destitution due to assessments designed to get people off benefits regardless of their needs. Those with mental health problems have found the entire process geared to exclude them. A government who will ruthlessly attack the weakest members of society is despicable. Theresa May is an integral part of that.

The Tories have presided over a series of cruel cuts to the NHS & social care. Increasingly large chunks of our health service have been sold off. Hospital closures, wage freezes & shrinking budgets leave us with a decimated health care system. Try to book an appointment with your gp or get seen at a&e this century and you you will know the struggle is real. Don’t be fooled by the nasty party’s attempts to shift the blame. The NHS is not failing because of immigrants. It is in its knees as a direct result of May & her cronies’ policies. 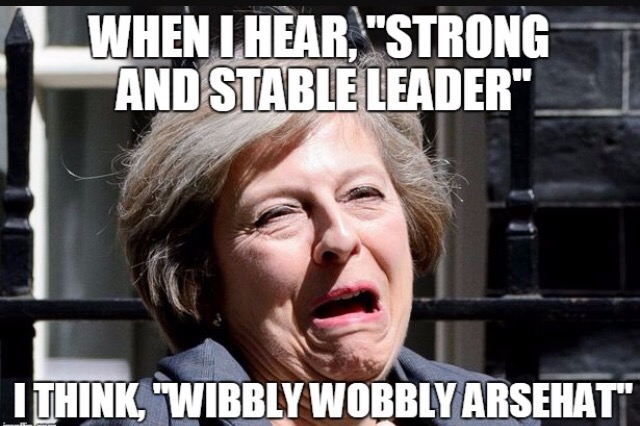 This post could go easily go on for pages. This a woman who loves selling arms to Saudia Arabia, who is happy to steal pensions from those who have worked all their lives for them, she proposes income tax & national insurance rises for working people whilst pledging 3bn in tax breaks for the rich. May has voted in favour of removing benefits for young adults & a whole raft of anti lgbtq+ proposals. Her party is responsible for Brexit & her ‘little England’ rhetoric is likely to destroy any chance of positive negotiations. Listen, this bitch held Trump’s hand; she can not be trusted.

I know there will be some people dying to question my feminist credentials for this, but let’s be clear, the PM is not a feminist. She’s the leader of a party who is cool with humiliating & endangering rape survivors. They promised to direct the taxes from sanitary products to women’s charities. They ended up funding an anti abortion group. Last year Phillip Davies (Tory MP), attempted to derail legislation designed to target violence against women. Only this week Mrs May gave her support to Tory Mp hopeful, Peter Cuthbertson a man who says that ‘promiscuous’ women are likely to make false rape allegations. Theresa May is no friend to women & it is incumbent upon those who are to hold her to account.

So, congratulations, Theresa. You are my official anti woman of the Week (month, year). Both you & your party are toxic.

Please, please, please do not give this anti woman (or her party) your vote. This election is not about finding the perfect candidate. This is survival. If you value a compassionate & fair society, DO NOT VOTE CONSERVATIVE. Get tactical, put that X wherever it will defeat the Tory candidate.

2 thoughts on “Anti-woman of the week…”