We are living in a, frankly, terrifying world. The march to the political right, climate chaos, human rights violations, erosion of reproductive rights are just the tip of the nightmare. It is easy to feel powerless in the face of such monumental issues.

I feel especially frustrated when my health limits my participation in protest. Signing petitions, sending emails & sharing information doesn’t feel like enough. In an effort to feel like I am trying to facilitate change I put my money where my mouth is.

For a few years now I have tried to pick a different charity or organisation each month to donate to. It’s not always a huge donation, but I think every little helps. It also really helps me deal with life to feel that I am supporting action that betters the world.

It occurred to me that I often discover people doing amazing work via social media, friends raising money and the content I consume. Thus I have decided to share the groups I am supporting each month in the hope that others might also feel moved to donate.

Immigration policy on both sides of the Atlantic are alarming. The American situation is beyond compression. Facist dehumanising techniques are in full force & repugnant acts are being committed. Raices are on the ground in Texas fighting for asylum at the border. They support those who have been detained, try to reunite separated families & advocate for unaccompanied minors. This work is vital. We can do nothing whilst sickening acts are waged against desperate people seeking safety. If you can, please consider making a donation.

If you are even fractionally sentient you will be aware the Donald Trump visited the UK last week. He did so with all his usual grace & charm. Yup, that’s right, none. Instead he gave us his standard fare; lies, ill manners & fuckwittery.

I’m delighted to confirm that we weren’t standing for it. A reported 250,000 people took the streets of London to protest Trump’s arrival on our shores. In Glasgow the crowd was smaller, but no less passionate.

I’ll happily take every opportunity to denounce the U.S. President & his vile administration. For me it boils down to one really simple fact; if you don’t loudly condemn their actions, you’re condoning them.

I don’t consider it hyperbole to describe the current GOP as fascists. Trump’s government displays every single facist warning sign. Rampant racism leading to dehumanisation comes straight from the nazi playbook. Language such a infestation combined with policies like family separation & Muslim travel bans are undeniably examples of this. Extreme sexism is unavoidable when the commander in chief is a sexual predator. When you combine his misogyny with the increased power of the religious right you create a dangerous situation. Reproductive rights, access to health care & basic human rights for LGBTQ+ people are at serious risk. Assaults on the free press. An inability to conduct himself in reasonable & decent manner add to his horrors. When mocking disabled people is fair game, but denouncing white supremacy is not, you have a society in serious trouble.

It isn’t possible to recount all of Trump’s bad conduct in one blog post. He represents all that I find repulsive. His Presidency puts vulnerable people within & without America at severe risk. I think all decent people have a duty to resist. I’m proud of my city for making our revulsion clear. 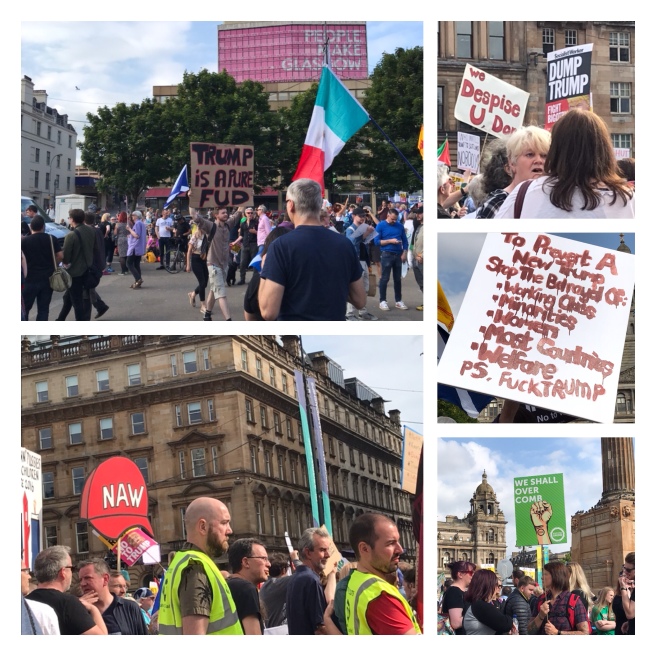 I spent the first half of the protest sharing a bench with some elderly Americans who thanked me for our support. They also asked me to explain some of the signs, which proved a little awkward. ‘Fud’ is not a word that lends itself to polite translation. It was, however uplifting to share a laugh and all that we had in common.

Protest is important & powerful. Please join in whatever capacity you can. Be that matches, rallies, direct action or even donations. Be safe, but be strong.

You can put your money to good by donating to these organisations.

The ACLU fight through the courts to defend the civil liberties of all Americans.

The Coalition to Stop Gun Violence does exactly what it says on the tin. The campaign for & work on legislation that will introduce gun restriction laws which will reduce gun violence.