I have a secret. It could be argued that keeping this secret makes me a bit of a hypocrite. For all my body positivity, there is one thing about myself that I cannot learn to love; my facial hair. 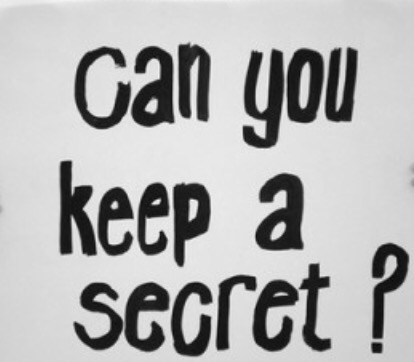 Until about I was about 30, I wasn’t a very hairy person at all. My body hair was all fair & fine. As such it wasn’t something that I gave much thought to. To begin with I had a little bit of fine hair on my neck, which I put down to getting a bit older. The hair quickly progressed to my chin, then to my upper lip. I started waxing it & so began my facial hair war.

As the hair got thicker I consulted my gp (as a person who had crazy periods, sometimes 1 a year, sometimes lasting 6wks) PCOS should have been any easy diagnosis. In actual fact it took 6yrs to convince a dr to even investigate. Blood tests revealed increased hormone levels & that was that. I was prescribed medication to regulate my periods, which thankfully worked. The beard, however, remains. I’m too pale & fair for laser removal and nothing else really does the job. The hair continues to get worse. I’ve tried waxing, hair removal cream & even a No!No!; none of which keep my face smooth for more than a day or two.

I can love my fat & my scars. I don’t even care what others thinks about my often hairy legs. I feel no compulsion to remove my pubic hair other than when I feel like it. I don’t wear make up daily & my hair is most often to be found in a very messy bun. I have skin tags & moles & birthmarks that it has never even occurred to me to feel self conscious about. I am almost entirely impervious to societal demands upon my body. Expect it seems when it comes to my increasingly hairy face.

A hairy face appears to be my line in the self love sand. I cannot get past the notion that it renders me repugnantly unwomanly. As I write those words I know how stupid & misogynstic & backwards they are. Yet, none of my strident feminist views prevent me from being utterly ashamed of my stubbly chin.

The fact that I have internalised this patriarchal bullshit makes me so angry. I know I don’t have to measure up to some nonsensical notion of femininity, but part of me still wants to. I hate that. I hate how much energy I waste on getting rid of this hair. I hate that despite my best efforts I have bought into such a narrow definition of what being a woman is.

Maybe part of this is the same as any other stigma, no one talks about it. Well, not outside hushed, unhappy tones with our closest ones. Or whispered exchanges with professionals who might rid us of the dreaded hair. I know other women who have PCOS, but none of them have visible facial hair & I’ve never asked. Are they too constantly removing fuzz? I wouldn’t know because I’m not sure if talking about it would be rude or even out right offensive. So, I just carry on feeling like the only person who could have a side job in Victorian freak show.

Until now. I’ve decided to come clean. Yup, I have a beard. I may not ever be ready to let the world see it, but at least I can start talking about it. It’s just hair, right? Fuck it. Girls can be furry too. What’s the worst that can happen? Someone might even have a good tip on how to get rid of it!

It occurred to me that I am constantly coming across wonderful women. In all aspects of my life I am repeatedly astounded at the amazing things women are achieving. I also realised that perhaps I am often surprised by how excellent these woman because no one is shouting about them. Well, I think it’s time we start hollering about how fantastic our fellow females truly are. With that in mind I’d like to introduce a new regular feature, Woman of the Week.

First to be drenched in praise is one of my very favourite tweeters, @stavvers. Going by the twitter handle Another Angry Woman, she is smart, funny & woke. I find myself nodding vigorously to every tweet she crafts. With a reliably intelligent comment on both the major & underreported stories of the day, a strong intersectional feminist view point & a knack for making idiots look ridiculous, she is a must follow. 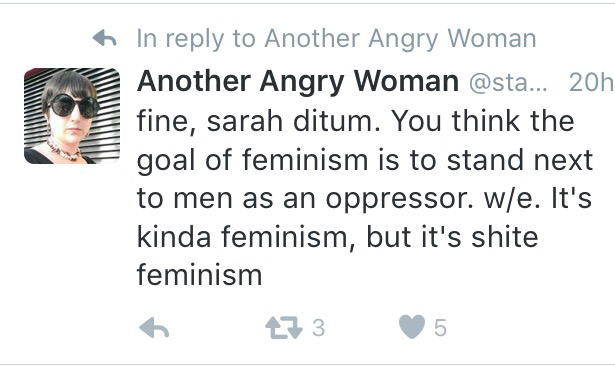 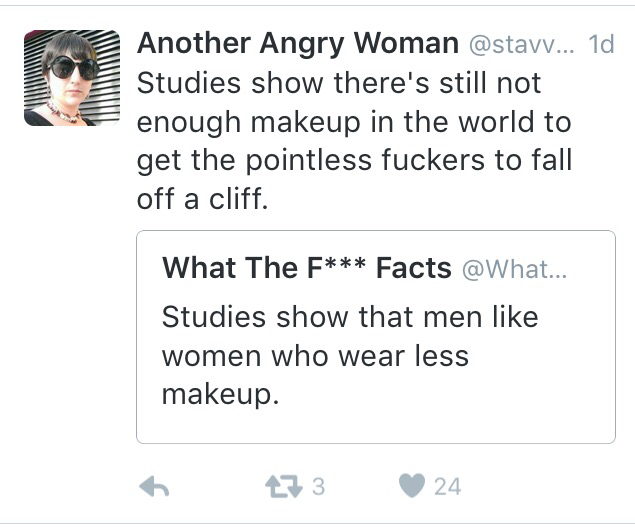 Her own blog makes excellent reading for anyone of a feminist persuasion. Her writing is a joyous experience; strident, hilarious & covering topics that need to be spoken about. Along with original pieces she does a periodic round of up of interesting things she has read, which are never less than brilliant.

What are you waiting for? Go follow @stavvers now. You won’t regret it.

There was an error retrieving images from Instagram. An attempt will be remade in a few minutes.