I knew Mother’s Day was going to be tough this year. Since I always over think every little thing, I did spend some time dwelling on that in the run up to Sunday. Occasionally my inability to switch my thoughts off serves me well, this was just such an instance.

It didn’t change how sad I felt, but I did stumble upon a new strategy. Simply put, I’m going to try my damnedest to have more fun. My life is not really all that easy (who’s is?). There’s a lot of pain, exhaustion, stress & large scale disappointment. None of which I can control. I’ve had to make some huge adjustments in my life expectations this year and that is, well, a process. I can’t change the fundamentals of my situation. I can let go a little bit. I can allow myself to please just me more of the time and I am going to. 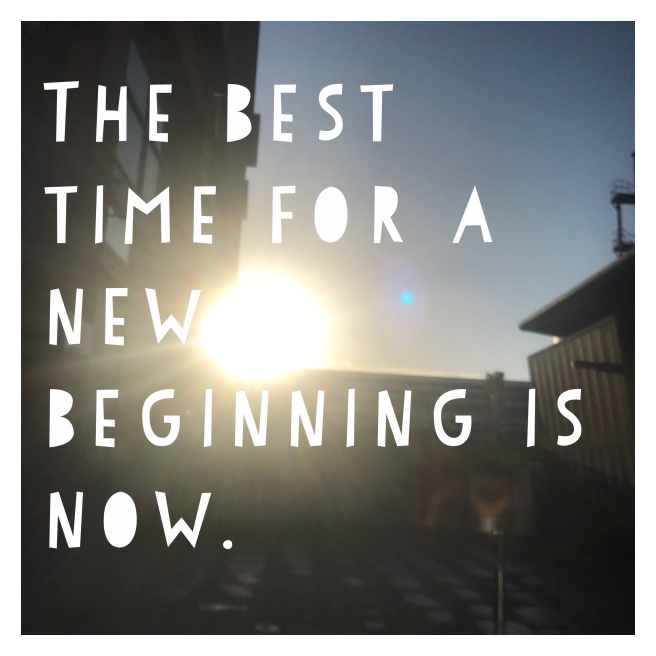 I’m going to date. For fun, god help me. I’m not seeking a soul mate or partner. The aim is merely to find some amusing people I can do enjoyable things with. Hopefully without anyone making too many demands. I’m reviewing all my filed away lists of things I’ve always wanted to do and bloody well jumping on anything that is actually doable. Efforts will be made to ditch the guilt. I’m going to say more no’s to the things I do for the benefits of others that cut me in two. Plus a lot more yes’s to anything & everything that makes me feel good. To hell with the rules or convention. Life is going to fuck me regardless, I might as well squeeze as out as much glee as I can along the way.

With that in mind I began my week with a jaunt to Edinburgh to see my favourite man. Friends who will let you say anything and always leave you feeling better than they found you are magnificent. So, I soaked up too many glasses wine & just enough of his loveliness to give me a major boost. I followed up with the an almost perfect day at the farm. Watching my baby nephew discover the world is a truly beautiful experience. The tiny goats were also worth the trip. 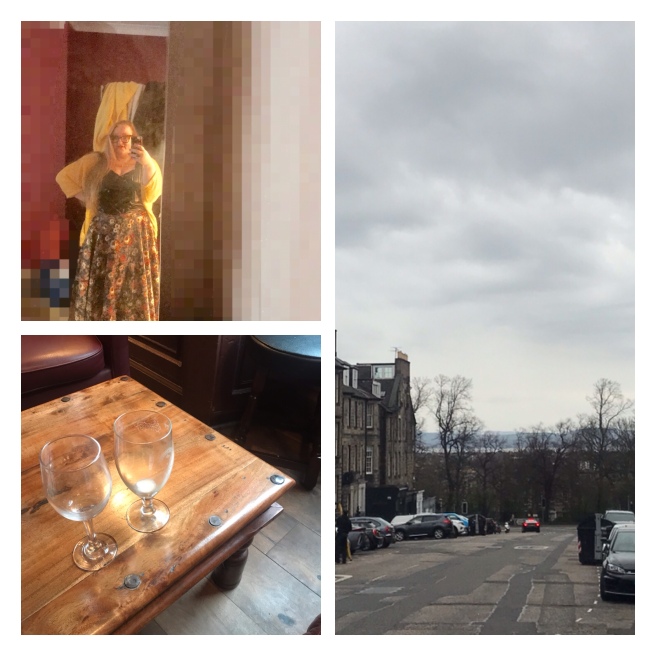 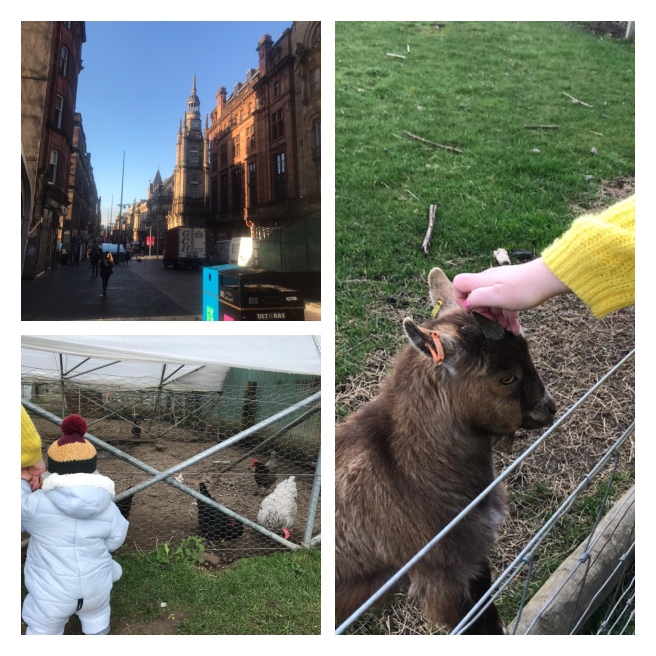 I feel like I’ve been hit by a truck now. It’s going to take some recovery days to get back to ‘normal’. My ratio of doing to resting isn’t what I’d hope for. I’m giving myself permission to use some of those good days for pure frivolity. 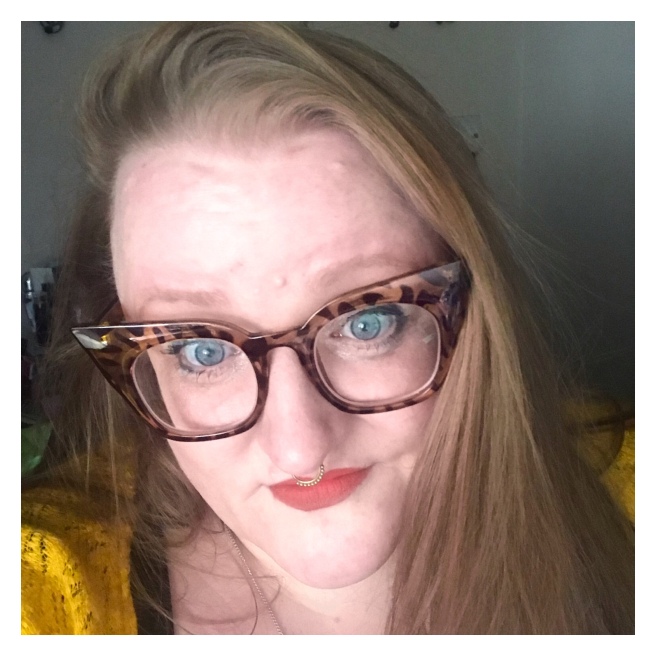 I’ve scaled back my ‘social engagements’ of late for various reasons, meaning note worthy outfits have been sparse. If I’m not in my jammies I’m doing medical nonsense or carry on with the little ones. High fashion has not been my go to.

Upping my #ootd game on my mind I planned something cute, did my hair & painted face. Then I made the stupid mistake of waiting until the end of a baba filled day to take any pictures. The rain wrecked my hair, I look frazzled and I’m really not loving how my arms look. I was going to abandon posting this look, but then it occurred to me that this is life. Flabby scarred arms, crumpled clothes & tired everything are reality. All the things you do to make the mess are worth more than the perfect picture anyway. 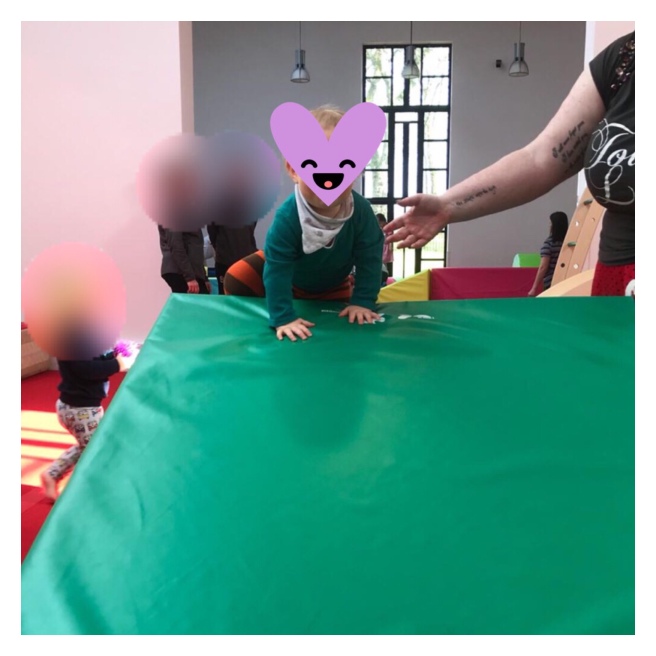 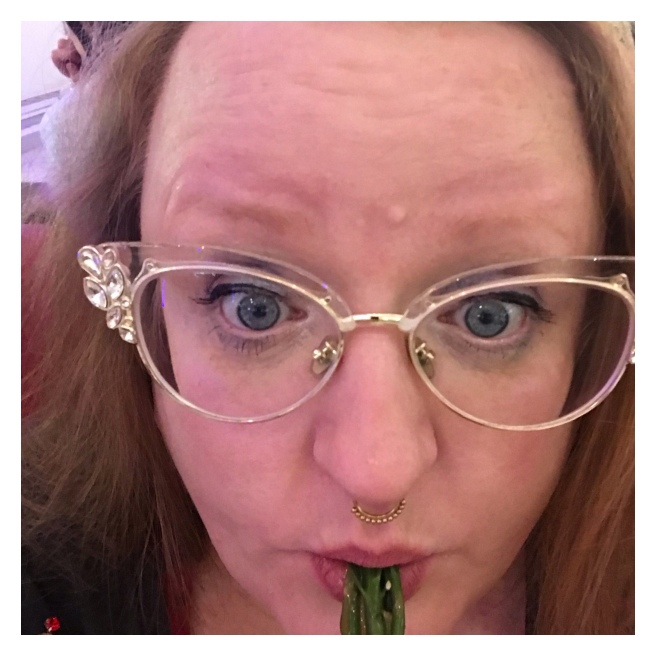 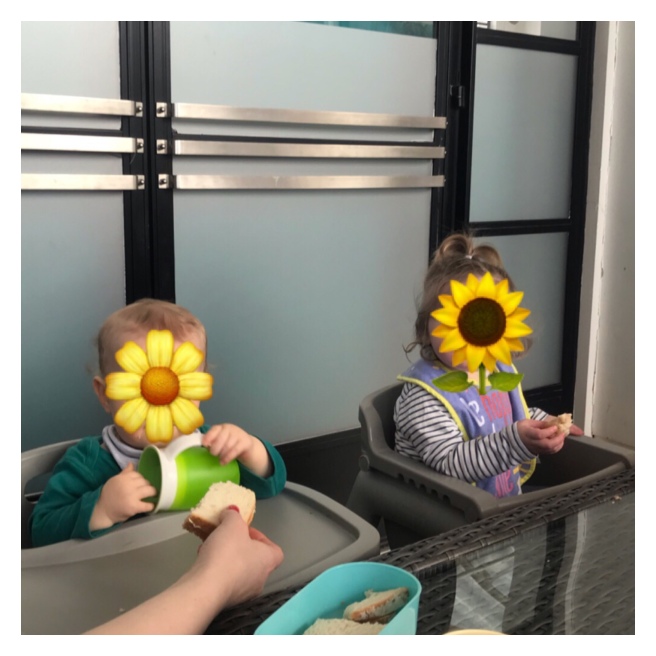 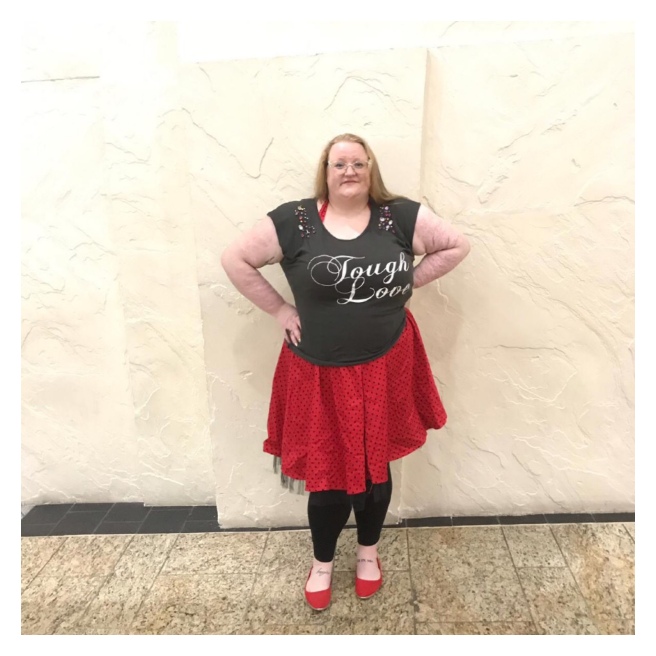 My first non medical related outing in a while coincided with the emergence of spring (I hope I haven’t jinxed it). I took the opportunity of not having to wear winter gear to spruce myself up a tiny bit.

Bright, fresh Sunday mornings are perfect for record shop trawling. I really had no idea how much pleasure getting record player would bring me. Not in a wanky, the sound is amazing way. Although it does sound nice; the delight for me is trawling through old records hoping to find a gem. So far, I almost always do. I used to frequent Missing Records in my teens/early twenties when I had very little money, but a huge desire to play cool music at top volume. In the intervening years we’ve all stopped buying physical music. The resurgence of vinyl has changed that & reunited me with a lost love. Missing has changed locations, but it feels the same. I had forgotten how much I enjoy this kind of music shop. I am so happy to be getting reacquainted. 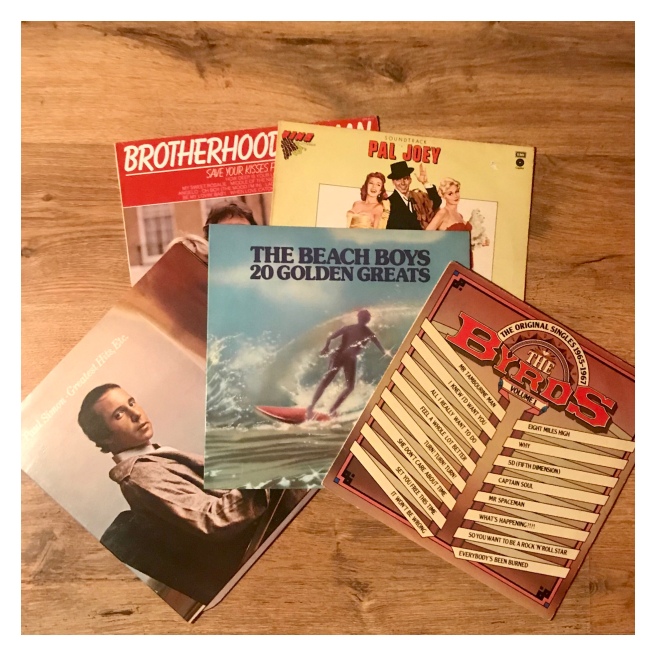 This weekend I managed to find a few classics plus some super sentimental and fairly odd choices. I’m going to blame my Granda for Brotherhood of Man. I simply can’t hear Save Your Kisses For Me without being flooded with childhood memories.

The rest of the day was spent vying with my mum and sister for all the baba’s cuddles. I was aided in my attempts to gain his affections by the shark on my t shirt. The boy is a big fan of ‘Baby Shark’ & instantly recognised the toothy creature. He then seized upon a new game in which he would point urgently at the shark & I would sing the song. It’s just as well I adore him because that song gets old pretty quick. 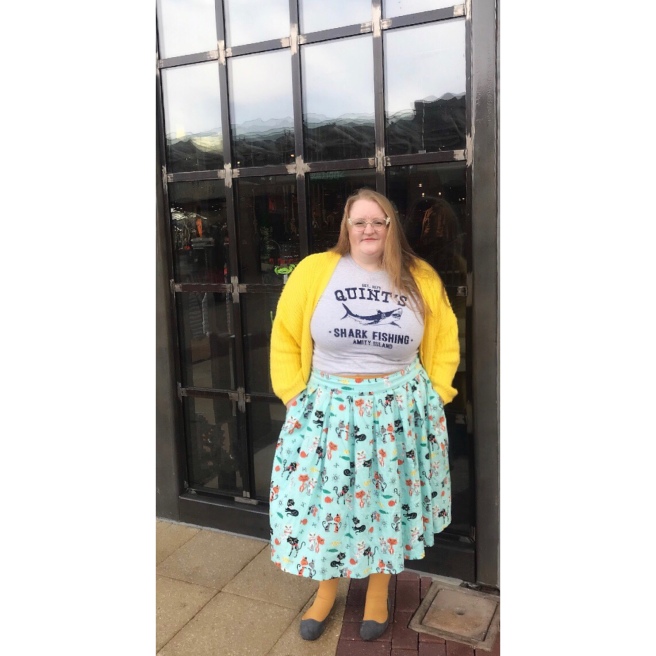 My clever little man thought the stripey orange cats on my skirt looked like tigers, so we also got a chorus of roars throughout the day. All of which goes to show that dressing in my demented fashion is a very good idea.

This week’s celebrated woman is someone I have the pleasure of knowing. She is a bopo goddess, a thrifting maven, accomplished public speaker & possibly the bubbliest person I’ve ever met. Ladies & Gentlemen, I give you Hayley Angell.

I met Hayley at a blogger event in Glasgow & was instantly impressed by her vintage look. I was also a little intimated by her polished confidence. I don’t find these events very easy. I have a lot of anxiety around new people & situations. I have even more anxiety about hiding my discomfort. The moment I spoke to Hayley I felt more at ease. Her sincere warmth allowed me to collect myself & have a good time.

I obviously immediately commenced following her on social media and have done so since. Hayley’s accounts are bursting with life affirming energy. Her honesty about her body positive journey; discarding control garments, trying new activities & generally enjoying her body is inspiring. She recently discussed her experiences as a plus size women taking burlesque classes. Despite outward proclamations of inclusivity she still felt it was assumed that fat women would be less assured. She got the sense that fatter folk were quietly ushered into the background. It takes guts to be open about this stuff. Even more to be honest about how often we convince ourselves that we belong at the back of class. Thus, she used her Instagram account to launch #stepforward a reminder to all plus size people that we are worthy of taking up space & being seen.

The Body Positive community has given me so much. I always want to say thank you to those who inspire me. I also want to spread their work because I know it can bring others happiness. Hayley is one of those fabulous women who can help you change how you see yourself. She is an insta must follow.

Bopo aside Hayley is, as I mentioned, a thrifting magician. Her Instagram is worth following for her second hand style alone. If you need tips on trawling the charity shops for fashion gold, Hayley is your woman. If you simply enjoy seeing a person enjoy themselves & clothes, she is still your gal.

I’ve only met Hayley in person once, but I would not be without her online presence in my life. For a shot of genuine self love, go press those follow buttons.

On Monday the Toyboy & I headed off for our annual (it’s the 2nd year, that counts, right?) trip to the Edinburgh Fringe. Three days of exhausting, but fabulous adventures ensued.

Our first show of the 2018 fringe was Phil Jupitus is Porky the Poet in Living in A World Where They Through the Ducks at the Bread . That title is quite a mouth full as was some of this show, but in a good way. I’ll be honest, I only really knew Jupitus from Never Mind the Buzzcocks & it turns out I like his poetry much more than I liked that programme. His poetic style is silly & witty & heartwarming. His in between chat is also all of the above. I’m a spoken word/poetry fan, but I think even poetry virgins would enjoy Porky’s words. Oh & bonus I got a free badge that sums me up fairly accurately.

Voodoo Rooms is a perfect example of example of Edinburgh Festival venues. It’s down a lane, riddled with stairs & you’re packed in tight enough to lose circulation in your extremities. We made the mistake of trusting directions of a stranger (male, why can they never admit they don’t know?). We walked around in a massive circle before discovering the venue was about 2 minutes from where we started & on arrival I realised I had actually known where it was all along; I just didn’t know the street name. Anyway, what I’m trying to tell you is this is a quintessential festival experience. Finding most venues will become a magical mystery tour of possibly the least disabled friendly city in the world. Everything is up a hill & 3 dozen stairs. Spoonies beware or budget for a lot of taxis!

We acted the tourist for a little bit; had a lunch from a food truck & bought Edinburgh rock. Then I tortured the TB with outfit pictures before an outfit change & catching up with some Edinburgh based friends. After a few cocktails & much hilarity we headed off to our last show of the day. 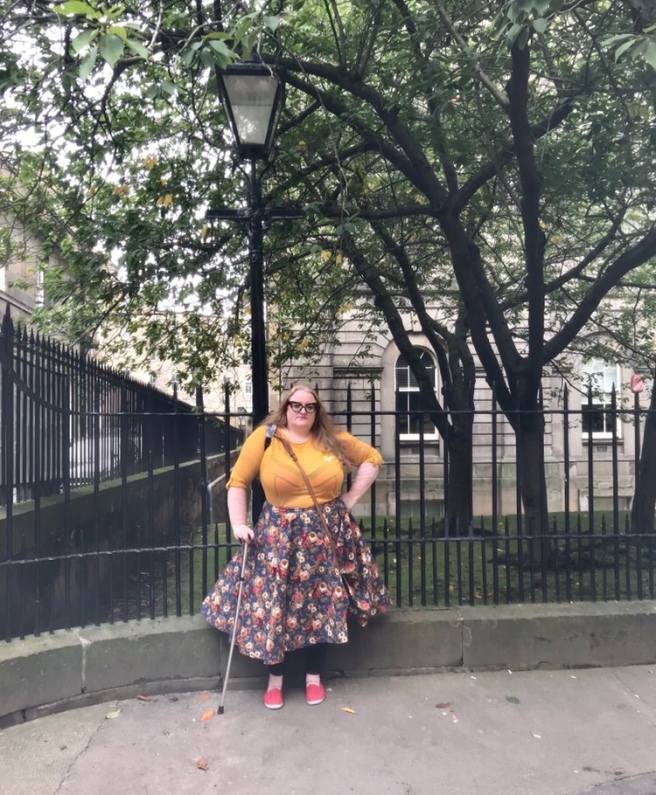 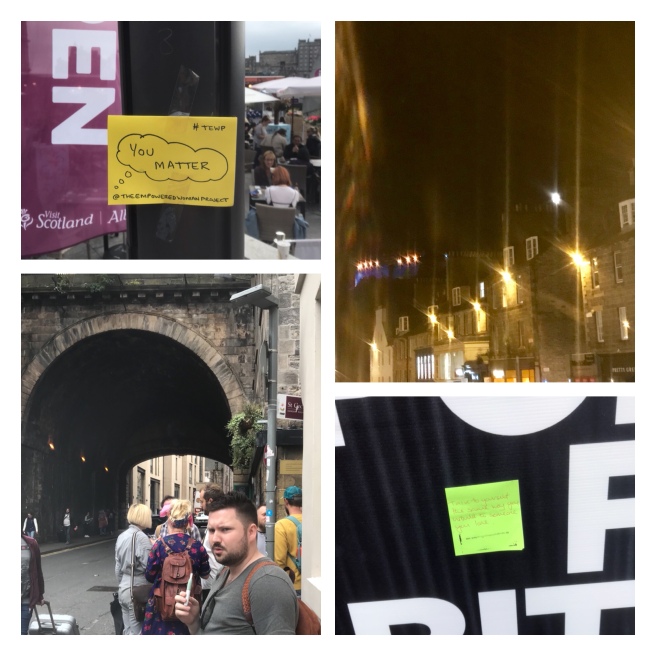 The Waverley is just off bottom end of the Royal Mile. It looks like it hasn’t been decorated since 60’s & feels like it might house a tiny part of real festival spirit. In the upstairs room there was a sparse audience & a life size cut out of Billy Conolly declaring ‘This is where I started’. I’m not sure if that’s inspiring or just a kick in teeth to those playing a quiet room, but the woman we came to see gave it a spirited try. Becky Fury (that’s her real name) hinted that she perhaps wasn’t having her best night, but she did have some interesting takes on current state of politics. I suspect the show that emerges from her Edinburgh run will be more polished than Lip Salve for the Soul. In the meantime her Star Wars movie via Corbyn memes was funny. Her visual display of how dehumanisation happens, somehow Hillary Clinton faired worse in polls than terrorists, was insightful. Plus her off the cuff material on my breasts was actually pretty fucking amusing. Anyone who can make ‘that’s how genocide happens’ a punchline & get me to laugh when the size of my tits is publicly discussed has got to have talent. I’d say book early for her 2019 show, it’ll be a cracker.

With only two shows under our belts we grabbed some very expensive fast food & headed back to our apartment. We needed a bit of rest because Tuesday was jam packed. Stay tuned for everything from medieval disco theatre to serial killer book podcasts all viewed with eyes adorned in razor sharp liner.