Last night I asked a women I thought was a waiter for our bill. From the confused look on her face I immediately realised she was not staff. In my embarrassment it occurred to me that my brain (& body) makes daft mistakes like this all the time. Also, ridiculous things just seem to happen to me. I have no idea why I am so bloody silly, but it certainly makes for some entertaining stories. Provided you give me a few years to recover from the humiliation that is.

For starters there was the time I was in hospital and one of junior surgeons who appeared on rounds was a guy I had dated. I didn’t recognise him right away. To be fair I was full of morphine and we’d only gone out for about 2 months 15years previously. Also, at that time he was a bus driver. Thus I didn’t expect to see him amongst my surgeons. Anyway, I was lying there, knickers exposed having my stomach felt when I thought a face in the crowd looked familiar. Skip to him returning to take blood and asking if I was ok with him being on my team. Then me slowly dying as he (re) introduced himself & it dawned on me that this man had seen me naked. Worse still that everyone clearly thought I was the kind of woman who slept with hot drs and then promptly forgot them. I mean, obviously I am precisely such as hussy, but I could have done without a barrow load of medical professionals being privy to that information.

Next was the time I turned up at work wearing odd shoes. They were the same shoe, but in different colours. I had done my standard fling clothes on & rush out the door morning routine. It was a dark winter morning & I didn’t notice I had on one red & one pale nude ballet pump. I didn’t notice all day long either. It wasn’t until I was on the bus home that my mismatching foot wear became apparent. What’s worse is when I asked my colleagues the next day how no one had noticed, it turned out they all had. They just assumed it was fashion choice I had purposely made & left me to it. Which probably sums up how I was viewed in that office fairly well.

There was the time I went on a date with a work mate without realising it was a date, which I suppose could happen to anyone. However, I suspect most folk wouldn’t have gone on the second date still oblivious that they were dating. Or the time I emitted the loudest, foulest fart seconds after concluding some of the hottest sex I’d ever had. Completely ruining my reputation as a sex kitten. I fell asleep during a lecture once and slept talked so loudly the professor thought I was asking a question. Oh & that time I burnt cookies in the Haagen Dazs kitchen, set off the fire alarm and caused an entire 12 screen to be evacuated.

Finally, my crowning glory of embarrassing moments. I was Christmas shopping in a fancy department store (if you’re local, it was Frasers). This place is an old building with a grand staircase which leads down into a beauty hall. They go all out at Xmas. Twinkly lights & decorations galore. This particular year they had a lush potted poinsettia at either side of each step. Step forward a sweaty & harassed me, carrying a million bags. I fainted at the top and rolled down the entire staircase. As I tumbled I knocked over every poinsettia one side, shedding items from bags & red petals as I went. I landed in a soil covered, tight laddering heap in front of the Chanel counter. My knees were grazed, but my pride took the real battering. The lovely staff wanted to fetch me a seat and maybe call an ambulance. I was so mortified that even if i’d broken both legs I’d have been out of there in flash. 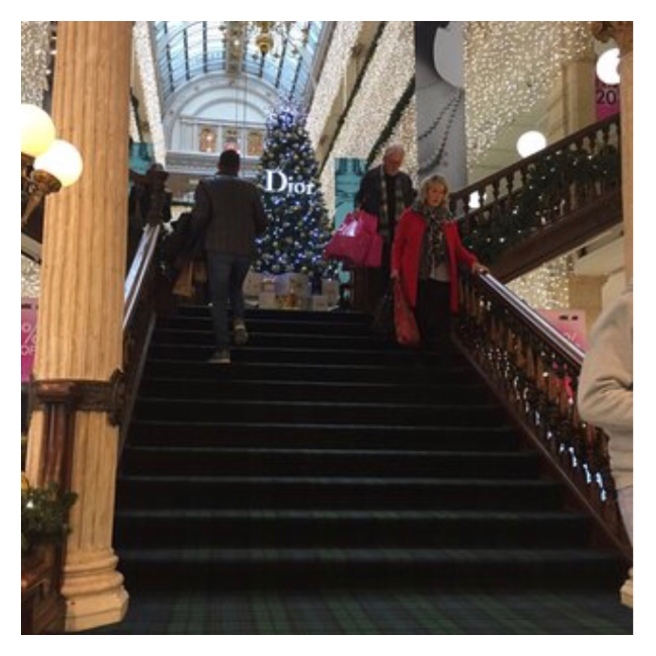 There are of course a million other occasions of misspeaking & farting & generally falling around. Laughing uproariously at myself is definitely the only way to go. So, I offer these stories for your enjoyment. If i’m going to me be a clumsy mess I might as well entertain folk.