I spent my Saturday shouting at holy people in rain. Not just for kicks, but because the religious anti-abortion group 40 Days of Light are again spending lent protesting choice outside a Glasgow hospital. As you can imagine, I find such actions repugnant & wanted to join the counter demo.

4o Days of light began their Lenten campaign with a sparsely attended event in George sq. They sought to attribute their protests to a desire to spread truth & offer choice. Yes, they’re actually trying to sell their aggressive tactics as supporting of choice. The little of the speeches that could be heard above the chanting of my fellow pro choice protesters consisted of lies, religious indoctrination & the kind of emotional manipulation expected from such groups.

Glasgow is a progressive city & it disturbs me to see these extreme conservative tactics taking hold here. This is 4o Days’seconds year protesting outside the new southern general hospital in govan. They plan to hold 8hr ‘vigils’ on each day of lent. The hospital has no power to prevent the protest as they will happen directly outside hospital grounds. They will however no doubt add distress to those attending the hospital as well as generally interfering with the daily business of the enormous hospital.

On Saturday I was sickened to hear a speaker talk of her fond memories of last year’s protest. Apparently, she delighted in harassing vulnerable people in a difficult situation. This revelation was followed by woman railing against a ‘pro abortion society that coerces woman into terminating pregnancies’ before moving onto tired and irrelevant tales of how she felt whilst pregnant. The event ended with an attempt to say a decade of the rosary, which I am pleased to say was drowned out by chants of my body, my choice. 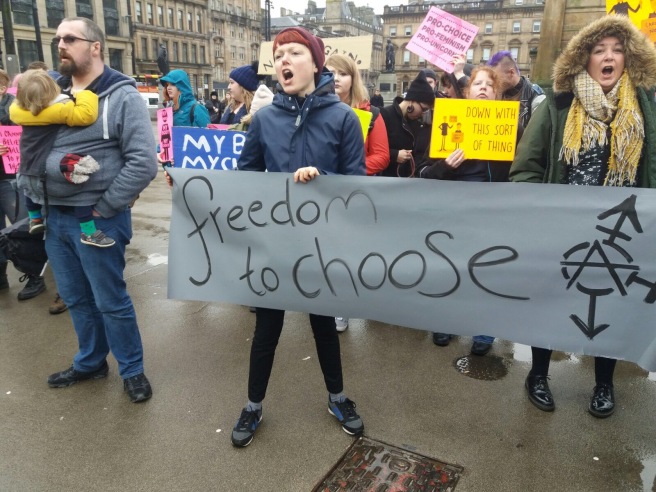 I can’t state strongly enough how much we must fight this move towards a campaign of lies & shame. The only humane & just option is choice. Pregnant individuals must be allowed safe & legal abortions. They must also be offered support to access such services. Please join me in letting 40 days of light know that there is no place for their harassment or lies in our civilised society.