Today I joined the counter demo against catholic anti abortion group 40 days of life. Regular readers may remember that I also attended this protest last year & I am incredibly frustrated to have had to return today. 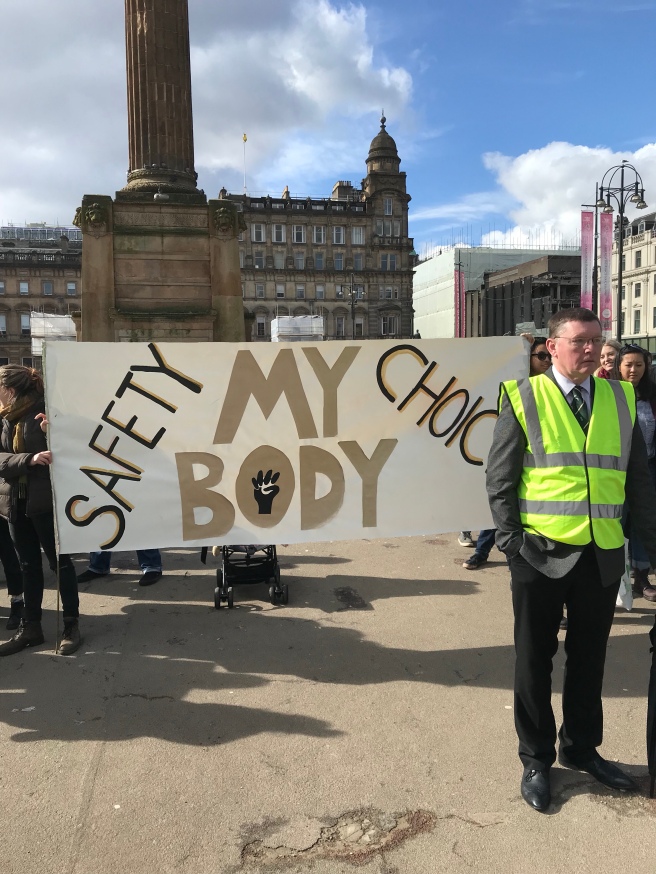 40 days of life are an international group who use their faith as an excuse to harass vulnerable people outside hospitals. They have taken American style anti abortion protests global. It both saddens & enrages me to see them operating in my city. During lent the group protest outside the maternity buildings of various Glasgow hospitals. Their claims of wanting to help people planning abortions are belied by their actions. I have seen this group standing outside my local hospital & they are helping no one. Their chosen location is outside the maternity building, but also at the main entrance to the hospital, providing maximum opportunity for intimidation. Regardless of the situation no one is happy to discover an unwanted pregnancy. To seek to cause distress to people in an already difficult situation is cruel. To add to the burdens of persons who may be traumatised or desperate is sickening. Their talk of kindness & love are incongruous with their actions. As is the fact that their hospital vigils cause unneeded stress & upset to expectant mothers, women who have miscarried, women with seriously ill & premature babies. All of whom use the building they protest outside. Their signs & prayers can be seen & heard from various wards in the building. Their presence causes untold harm. 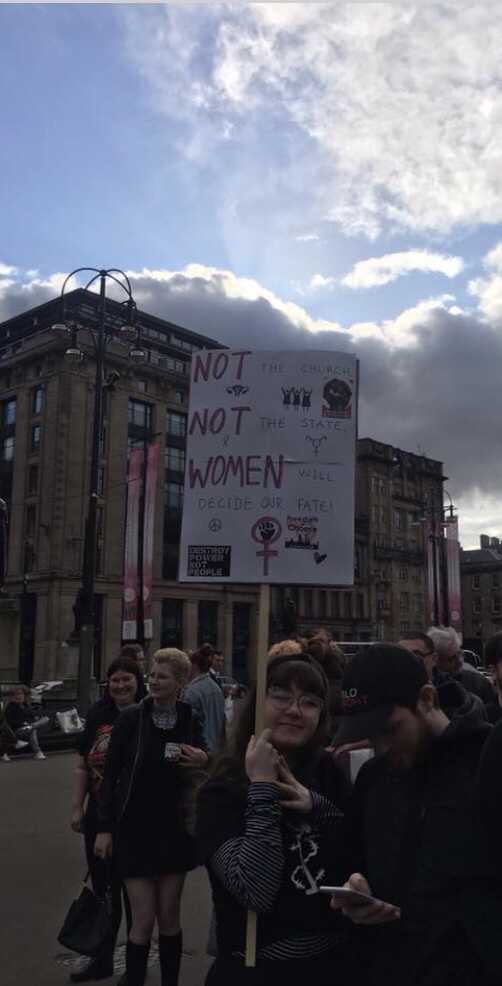 I was truly sickened today as I listened to their lies, inaccuracies & smug self congratulation. I could barely believe my ears as I heard Robert Colquhoun (40 days of life, international director) praise the group for their work. He talked of how happy he was at protests in Argentina & how he hoped they might prevent a proposed change in abortions laws. For the record Argentina currently only permits legal abortion in cases of risk to mother’s life or rape. In practise even in those cases abortion is by no means guaranteed. The influence of Catholic Church is a major factor in current abortions laws in the country. The result of which laws is huge numbers of illegal abortions. Many people die as a result of unsafe illegal abortions. Many suffering treatable complications also die because there are legal penalties for those caught undergoing ‘back street’ procedures, thus many are afraid to seek medical help. As always those living in poverty are hardest hit. The poorer the person the less likely they are to be able afford decent care, making them more likely to experience serious complications, death or be plunged further into poverty by the responsibilities of additional children. This is a situation that Coluqhoun & his cohorts are actively trying to maintain. To call such an organisation pro life is laughable. 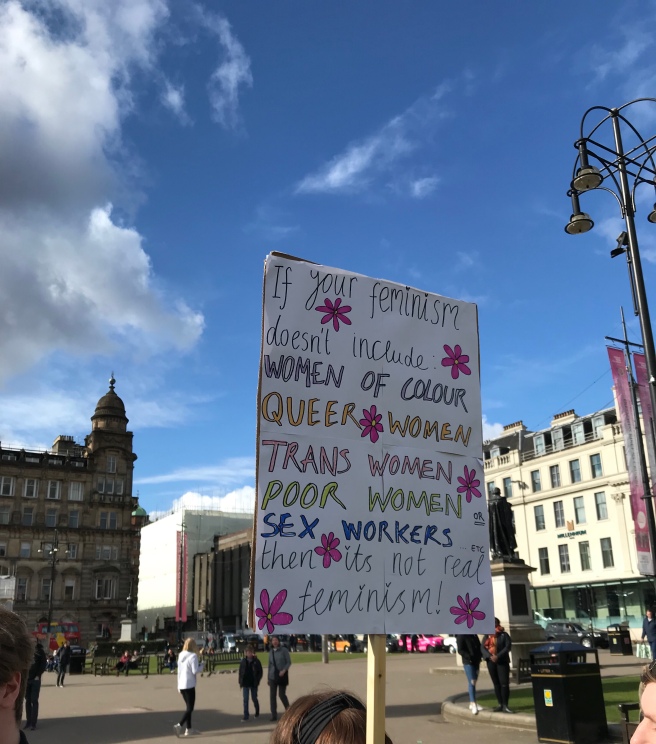 Colquhoun went on to identify a clinic in England that performed the majority of late term abortions in England. He talked of wanting to protest that clinic in an attempt to stop those procedures. Let me remind you that late term abortions (after 24 weeks) are performed in the UK only in extreme circumstances. Namely that the physical or mental health of the mother is at extreme risk, that continuing with pregnancy would pose a threat to their life or that the fetus is found not to be viable or to have a condition or disability that would severely impair their chances of any quality of life. In plain speaking those who have late term abortions are about as vulnerable a group as it is possible to find. We are talking about abused children, raped & tortured adults, people who want to continue with their pregnany, but face death if they do so & those whose unborn child will be still born or so severely ill they are likely to live only short lives filled with pain. Is there anyone amongst that group who you would wish to see harassed? To have possibly one of the most painful periods of their life debated in public? These are the very people that 40 days of life today cheered the notion of obstructing. That they would pin point a clinic performing such essential procedures is evil. All their talk of God’s love & the sanctity of life amounts to deliberately tormenting & shaming people who have already suffered more than anyone should ever have to bear. 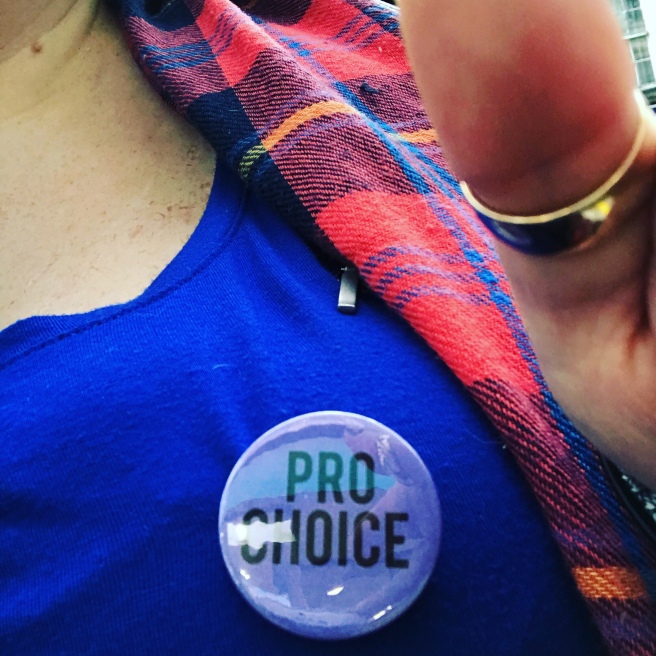 These are just two of the selfish speaking points. There were many more disgusting acts celebrated. Many lies told. It is crucial that we do not let this go unopposed. These American tactics are new to UK & we must not let them take hold. Religious extremists (for that is what they are) must not be allowed free reign to abuse people undergoing lawful medical treatment. We have to stand up & protect the right to choose. Access to safe abortion saves lives. Beyond that every child should be born to parents who both want to & are able to properly care & provide. 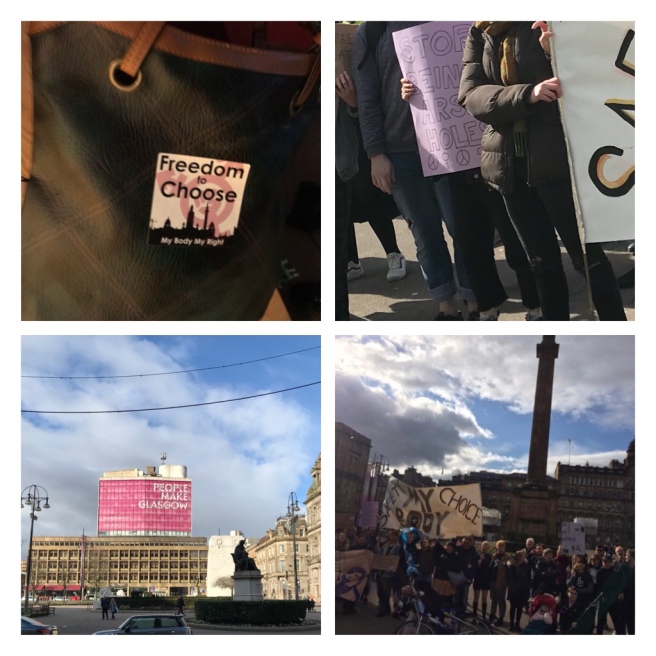 I passionately believe that everyone has a right to quality sex education, access to contraception and complete bodily autonomy. I am absolutely prepared to fight for those rights. I hope that you are too.

2 thoughts on “Keep your rosaries off our ovaries…”